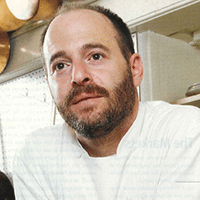 BIO: Chef and owner of Quince, Michael Tusk, draws inspiration for his Italian cuisine from his local famers and growers throughout Northern California. After graduation from Tulane University, he enrolled himself in the Culinary Institute of America in Hyde Park, New York. Wanting to broaden his knowledge of French and Italian cuisine, Michael left for Europe and worked in numerous Michelin starred restaurants. While staying in Italy’s Barbaresco region, he developed his interest in Northern Italian regional cuisine.

In 1994, after returning to San Francisco he began working highly influential restaurants such as Stars, Oliveta and Chez Panisse and attributes much of his cooking success to Alice Waters and Paul Bertolli.

To hire Michael Tusk for an endorsement, personal appearances, or book signing contact the experts at Celebrity Chef Network at booking@celebritychefnetwork.com  or 212-410-9879.