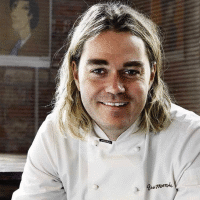 BIO: Beginning his culinary journey at 15 years old, with an apprenticeship at the Hyatt in Melbourne under Roger Leinhard, Shannon Bennett continued his career to Europe cooking with Albert Roux, John Burton and Marco Pierre White.

In 2000, Shannon opened Vue de monde in Carlton and soon after, opened the current location in Melbourne. His classic French cuisines with a modern Australian setting, is evident in his cooking. Vue de monde was awarded the Restaurant of the Year by the Australian Gourmet Traveler in 2006 and 2007. His next restaurant, Café Vue and Bistro Vue were both opened in 2006, and by 2009 Shannon Bennett opened his second location of Café Vue, and the third was opened right outside of Melbourne.

An established cookbook author, Shannon Bennett released his second edition of his first book, My Vue in 2007, My French Vue also in 2007 and Shannon Bennett’s Pairs in 2009. Shannon continues to evolve Vue de monde and renovate the restaurant into a more environmentally sustainable building. He plans to have it run off solar, wind power, and other eco-conscious innovations. Shannon Bennett is passionate about fighting obesity in today’s society, and runs every day to stay in shape and keep off the extra pounds from his daily eating habits. Shannon Bennett is available for speaking engagements, cooking demonstrations, and corporate appearances.

To hire Shannon Bennett for an endorsement, personal appearances, or book signing contact the experts at Celebrity Chef Network at booking@celebritychefnetwork.com  or 212-410-9879.