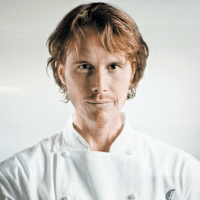 Chef Grant Achatz has been achieving greatness in the culinary world since he graduated from The Culinary Institute of America in Hyde Park, New York over a decade ago. Training under the critically acclaimed chef Thomas Keller at his infamous California restaurant, The French Laundry, prepared Chef Achatz to step out on his own in 2001 as he moved to Chicago to take on the role of Executive Chef at Trio. Thriving at the helm of the kitchen, Chef Grant’s talents were recognized nationwide as he was named one of Food & Wine magazine’s best new chefs in America in 2002 and was awarded the James Beard Rising Star Chef award in 2003.

Following his great success at Trio, Grant Achatz decided to open his own restaurant in 2005 named Alinea. The following year, Alinea was named the best restaurant in America by Gourmet magazine in their feature on America’s Top 50 Restaurants. In the years that followed Achatz and his restaurant continued to win multiple awards including the James Beard Foundation Award for Best Chef: Great Lakes, the James Beard award for Outstanding Chef, the Mobil Five Star Award from Mobil Travel Guide three years in a row, and the AAA Five Diamond Award.

In 2008, Chef Achatz published his first cookbook, entitled Alinea. In the cookbook, Grant shares six hundred recipes, each accompanied by photographs, which are cooked in his restaurant. In 2012, Chef Grant released his memoir with co-author Nick Kokonas entitled Life, on the Line: A Chef’s Story of Chasing Greatness, Facing Death, and Redefining the Way We Eat. The book tells the story of Grant Achatz’s life including his 2007 diagnosis of stage IV cancer of the mouth which he overcame and used as inspiration to further his culinary career and become an even better chef.