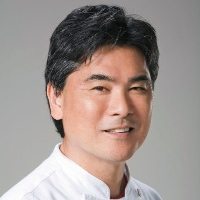 Restauranteur and Celebrity Chef Roy Yamaguchi is a master of fine Hawaiian cuisine and has over two dozen signature restaurant locations peppering the globe from the U.S. to Guam and Japan. Chef Roy is recognized as one of the founding fathers of Hawaiian fusion cuisine and he blends together Hawaiian flavors with influences from other cultures to create a medley of flavors sure to hit all the right taste buds. In March of 2016, Chef Roy announced he would be opening a new Roy’s restaurant at sea aboard MSC Cruises’ MSC Seaside. He joins a long line of Celebrity Chef Speakers who have opened restaurants on cruise lines such as Curtis Stone and Jamie Oliver.

Chef Roy’s Hawaiian fusion cuisine is a wide-ranging blend of California, classical French and Japanese cooking traditions. He was born and raised in Japan but attributes his love for Hawaiian cuisine from his paternal grandfather who owned a tavern in Maui during the 1940’s. He moved to New York to attend the Culinary Institute of America where he graduated in 1976. He then held a number of jobs working in revered California restaurants like L’Escoffier, Le Gourmet and L’Ermitage.

Celebrity Chef Roy Yamaguchi is now a James Beard Foundation award winner for Best Pacific Northwest Chef and hosted his own cooking TV series on PBS called Hawaii Cooks with Roy Yamaguchi. He has published 3 cookbooks sharing the recipes of his tasty cuisine. Chef Roy is available for hire for cooking demonstrations or celebrity chef speaking. He gave the commencement speech at the 1996 Culinary Institute of America and is now on the CIA Board of Trustees.