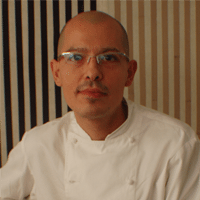 BIO:  The only two Michelin stars in Brooklyn were awarded to Chef Cesar Ramirez and his restaurant, Chef’s Table at Brooklyn Fare Kitchen. Located in downtown Brooklyn is far from Cesar’s culinary path of Manhattan where he was once the Chef de Cuisine at Bouley.

Chef’s Table is not your normal restaurant; Brooklyn Fare Kitchen was just remodeled to accommodate 18 guests instead of 12 and is part of a grocery store in Brooklyn. Cesar Ramirez has kept the concept simple, you eat in the kitchen—Cesar’s work space and only gets the very best ingredients.  Jean-Luc Naret was quoted in GrubStreet New York as naming Ramirez’s Table as one of the best three meals he has had in the world this year.

Cesar Ramirez prefers to be called a craftsman and knows his food speaks for itself. Cesar didn’t start in New York, he made his was from Mexico and began his restaurant experience in Chicago where he worked at Tru. In Chicago he met David Bouley and eventually became chef at Danube, David’s restaurant.

To hire Cesar Ramirez for an endorsement, personal appearances, or book signing contact the experts at Celebrity Chef Network at booking@celebritychefnetwork.com  or 212-410-9879.