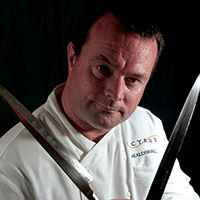 BIO: A graduate of Cornell University’s School of Hotel Administration, Douglas Keane began his career at The Four Seasons, a three-star restaurant in the Seagram’s Tower working under chef Christian “Hitsch” Albin. Following his time with Albin, he teamed with New York City’s Lespinasse with Chef Gray Kunz. While here Douglas was very impressed with the exotic flavor combinations and the precise technique in which the line cooks possessed. Next, Douglas Keane joined Chef Traci Des Jardins’ team in San Francisco at Jardiniere and later became chef de cuisine. After being granted  leave of absence, Douglas Keane served as opening sous chef at Gary Danko where his friendship with his future partner, Nick Peyton started. Douglas returned to Jardiniere as executive chef and in 2002, he was honored as the Rising Star Chef by the San Francisco Chronicle and earned three and a half stars for his cuisine.

Partnering with Nick Peyton, they opened Cyrus, a luxury restaurant opening in Sonoma County in 2005. Cyrus is Nick and Douglas’ “dream restaurant” specializing in ambitious cooking style that Douglas Keane refers to as “contemporary luxury.” The ingredients used in Cyrus are uncommon and are used to create exciting new tastes for guests.

Cyrus and Chef Douglas have been the recipient of an abundant amount of accolades which include two stars from The Michelin Guide, four stars from Michael Bauer at the San Francisco Chronicle, Gourmet magazine’s Top 50 Restaurants in America, Esquire magazine’s Chef of the Year and Food & Wine magazine’s Best New Chef. Douglas Keane was awarded the James Beard Best Chef—Pacific award in 2009. He is available for speaking engagements, cooking demonstrations and hosting.

To hire Douglas Keane for an endorsement, personal appearances, or book signing contact the experts at Celebrity Chef Network at booking@celebritychefnetwork.com  or 212-410-9879.