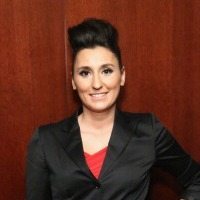 TV Host and Celebrity Chef Dietitian Gina Keatley has become the go-to gal for all things nutritious. She is a Certified Dietitian-Nutritionist who founded her own private practice called Keatley Medical Nutrition Therapy. Her practice helps educate and promote better lifestyle habits for individuals suffering from diseases related to nutrition such as obesity, diabetes and eating disorders. Gina has been called upon as an Nutrition Expert by many major news programs and talk shows including appearances on CNN, the Dr. Oz Show, and BBC Worldwide. In 2013, Gina was awarded the President’s Council on Fitness, Sports and Nutrition Community Leadership Award for her efforts to create a healthier America.

Celebrity Chef Dietitian Gina got her degree in Nutrition from New York University. She then helped co-found Nourishing USA, where she worked for 5 years as the Director of Nutrition and Culinary Arts. Nourishing USA is a non-profit organization that helps support local food banks, soup kitchens, and emergency shelters in the New York area. Celebrity Chef Dietitian Gina Keatley got her first taste of Food Network as a contestant on Extreme Chef. She then appeared as a contestant on Top Chef: Seattle in 2012. A year later she joined Uncanned Productions as the host of her own TV show Healthy Soul With Gina Keatley. In it she touches on a variety of topics surrounding food culture and health & wellness.

In 2014, Gina was chosen as a panelist for L’Oréal Paris and Glamour Magazine’s Top Ten College Women speaking event that was moderated by Glamour editor-in-chief, Cindi Leive. She has a commanding stage presence and a genuine interest in educating others about the benefits of good diet habits. That same year she debuted her first documentary titled Far From Healthy that took a closer look into America’s food landscape.

Celebrity Chef Dietitian Gina Keatley is dedicated to educating the public on better ways to lead a healthy lifestyle.