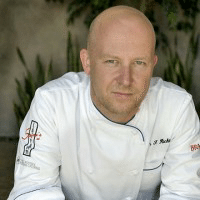 BIO: Celebrity Chef Stefan Richter is known just as much for his flair and culinary cockiness as he is for his intricate flavors and refined dishes. As runner-up on season 5 of Bravo’s Top Chef, Chef Richter made a name for himself by winning the most “Quickfire” and “Elimination” challenges on the show. Despite not emerging from the show victorious, Richter’s cooking skills were on display as he created dishes such as lamb chops with tabouli, chicken paillard with grilled corn and nectarine and strawberry tartlet with thyme.

Born in Finland, Chef Stefan Richter spent most of his childhood in Germany. His passion for cooking was instilled in him by his father, and Chef Richter spent time training in all areas of the kitchen during his youth. His formal culinary education began 1987 when he completed a three-year apprenticeship at the prestigious Hotel and Culinary School in Immenstadt and Bad Woerischofen, Germany. During this time, Chef Richter worked at the two-star Michelin restaurant of the Landhotel Schlosswirtschaft and was named the Achenbach Award recipient and Finlandia Award winner, presented to young European chefs, in both 1991 and 1992.

Next, Stefan Richter left for Zurich, Switzerland to study at its famed Hotel and Culinary School. While completing the program, Richter worked in a number of kitchens including Germanys Kur and Sports Hotel and Maritim Seehotel and the Suko-Thai Hotel in Bangkok. He learned to master a variety of techniques and adopted an appreciation for the use of local produce and ingredients. His studying and apprenticeships paid off after he completed a program at the Fachhochschule Würzburg-Schweinfurt in Germany to earn a Certified Master Chef diploma in 1993.

Soon after, Stefan Richter left Europe for the United States and a position as sous chef and garde manger for the Ritz-Carlton in Dearborn, Michigan. In 1998, he was invited to join master chefs Grant McPherson, Sotta Kuhn, Jacques Torres, Jean Philip Maury and Marc Poidevin as part of the culinary team opening the Bellagion Hotel, Resort & Spa in Las Vegas. As executive sous chef, Richter was responsibly for creating, developing and executing menus for the $25 million banquet kitchen. Chef Stefan Richter currently lives and works in Los Angeles at his three restaurants. Celebrity Chef Stefan Richter is available for speaking engagements, endorsements, and cooking demonstrations.

To hire Stefan Richter for an endorsement, personal appearances, or book signing contact the experts at Celebrity Chef Network at booking@celebritychefnetwork.com  or 212-410-9879.