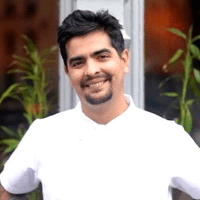 Celebrity Chef Speaker Aaron Sanchez is a culinary trailblazer in the world of modern Mexican cuisine, infusing old traditional flavors with a new twist. Needless to say the demand to hire Aaron Sanchez for trade shows and events is only getting hotter! This top celebrity chef is a featured judge on Food Network’s Chopped and the host of the Cooking Channel’s Emmy-nominated TV series, Taco Trip. Away from the TV set, Aaron is a successful restaurateur and cookbook author whose most recent venture John Besh called Johnny Sanchez opened in August of 2014. The restaurant now has two locations in New Orleans and Baltimore.

Aaron’s father is a celebrated Mexican chef, Zarela Martinez who he attributes his commitment, skills and passion to and the reason he is one of the leading contemporary Latin chefs. As a teenager in New Orleans, Aaron honed his skills under the late Paul Prudhomme and eventually graduated with a degree in culinary arts from Johnston & Wales University. He worked his way through several kitchens with business partner Alex Garcia before landing a spot as the co-host of Food Network’s Melting Pot. He has since made celebrity chef appearances on numerous Food Network shows such as, Chefs vs. City, Chopped, Best Thing I Ever Ate, Next Iron Chef, and more.

Aaron is the author of 2 cookbooks, La Comida del Barrio and Simple Food, Big Flavor: Unforgettable Mexican-Inspired Recipes from My Kitchen to Yours. He is also a celebrity spokesperson for IMUSA with whom he designed his own line of cookware. In 2016, Celebrity Chef Speaker Aaron Sanchez has been hired as a featured celebrity chef at food festivals all over the U.S. including one of the biggest foodie events each year, the South Beach Wine & Food Festival.

Aaron takes pride in using his celebrity status to help build the community around him. He is currently an ambassador for Why Hunger? and The Food Bank NYC, with the end goal to aid in hunger and poverty relief stateside and around the world. He is one of the top celebrity chefs behind the Chefs Move! scholarship program helping diversify kitchens all over the world by assisting minorities in training and preparing for kitchen leadership roles.