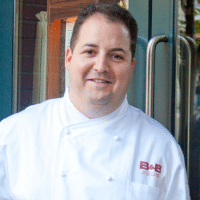 A successful restauranteur and entertaining host, your audience is in for a treat when you hire Josh Capon. He is the executive chef of Lure Fishbar, B&B Winepub, and El Toro Blanco in NYC, as well as Lure Fishbar in Miami. Also a television personality, Josh hosted Spike TV’s first food series, Frankenfood. In addition, he is the six-time winner of Rachael Ray’s annual Burger Bash.

For his first restaurant Lure Fishbar in NYC, Josh selected a location that would surely bring his business good fortune. It was formerly the location of Canteen and where Josh met his wife and future business partners. This is also where his nickname Mayor of Mercer was developed. Within blocks of one another, Burger & Barrel Winepub and El Toro Blanco, a Mexican restaurant, soon followed. Bowery Meat Company is Josh’s newest restaurant, proving that Josh can master all styles of cooking.

Josh is a humorous and enthusiastic chef, making him appealing for television appearances, public bookings, and endorsements. For example, he is a frequent guest on Kelly Ripa, The Chew, and Rachel Ray. Beyond television appearances, Josh Capon is an equally impressive live host for events and demos. Josh hosted over 300 VIP guests at the Victor Cruz Giant Tailgate Face Off, a fundraiser sponsored by Chase to raise money for the Victor Cruz Foundation. In addition, Josh has performed cooking demos for the Macy’s Culinary Council and endorsed Samsung’s VR equipment as part of Samsung’s 360 Virtual Reality Experience, 360 Meals.  Partnered with Gotham Steel, Josh also sells his own line of non-stick cookware.

Beginning by serving his friends, Josh discovered his gift for cooking while attending University of Maryland. This led to Josh transferring to culinary school at Johnson and Wales University for his bachelor’s degree. After receiving an offer from Charlie Palmer, Josh participated in opening the Lenox Room. Subsequently, Josh used this as a launching pad to pursue his culinary studies through Europe and eventually return to Manhattan where he launched his career.